We have detected that you are using an Ad Blocker.
PracticeUpdate is free to end users but we rely on advertising to fund our site. Please consider supporting PracticeUpdate by whitelisting us in your ad blocker.
We have sent a message to the email address you have provided, . If this email is not correct, please update your settings with your correct address.
The email address you provided during registration, , does not appear to be valid. Please update your settings with a valid address before to continue using PracticeUpdate.
Please provide your AHPRA Number to ensure that you are given the correct level of access to our site.

Interested in receiving weekly updates about the Obesity, Metabolic Syndrome, and Prediabetes Center of Excellence?

It is common sense that highly processed foods are not what we would want our patients to be consuming on a regular basis. What may be surprising is that they are now the most common source of calories for Americans and up to 90% of the added sugar consumed. What is more surprising is the lack of conclusive evidence on the harms of such diets as the authors point out:

That is why NIH researcher Dr. Kevin Hall and colleagues set out to explore the effects of this diet which has important implications for the dietary advice we give our patients.

For clarity, the researchers wanted to compare diets which had foods that were unprocessed or minimally processed versus those that were ultra-processed. An example meal and snack for the two groups are listed below with a complete visual menu of the study meals created by researcher also available. 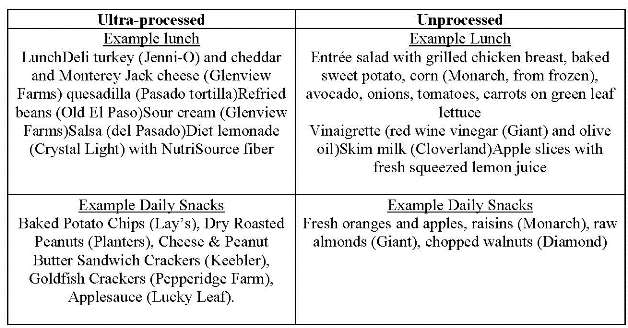 For this month-long, well controlled experiment, the research recruited 20 weight-stable young adults (average age, 31 years; average BMI = 27) to reside in the NIH Clinical Center. For the first 2 weeks, the participants consumed either an ultra-processed diet or a calorically controlled unprocessed diet, with a crossover to the other group for the remaining 2 weeks. Importantly, during the trial, the participants were allowed to consume food as much or as often as desired (ad libitum) beyond the baseline diet. They were also asked to perform daily stationary bicycle exercise at a low intensity to avoid sedentary behavior. The research even measured the speed with which the foods were consumed.

The researchers concluded that limiting consumption of ultra-processed foods may be an effective strategy for obesity prevention and treatment.

This research study is the first to prospectively demonstrate in a well-controlled manner that ultra-processed diets promote weight gain. Although it could be argued (mostly by manufacturers of such foods) that the ultra-processed diet group consumed more and this could explain the weight gain—that is exactly the point and I am glad that the researchers created a design that captured the real world reality of “Betcha can’t eat just one!”

The fact is that these foods are engineered to create mindless overeating. They have the perfect fat-to-carb ratio, density, and mouth feel to make the consumer keep eating. The hormone changes and the increased speed of consumption point to previous research in animals, which has demonstrated that ultra-processed food cause immediate brain changes in reward centers that make them hard to avoid.1

We have the strongest evidence to date that ultra-processed foods promote weight gain and hormonal changes associated with unhealthy eating behaviors. Keeping healthy dietary patterns, such as the Mediterranean diet, in mind, a more impactful starting point for many patients trying to lose weight or improve metabolic status might be discussing their intake and understanding of the impact of ultra-processed foods. Asking about intake of ultra-processed food such as the “Cs” (candy, chips, crackers, cookies, cakes, colas, and cold-cuts [processed meats]) and working toward healthy alternatives may be the best place to start. The visual menu from the study is also a nice tool to contrast these diets and provide examples of healthy alternatives.

The ultra-processed food diet resulted both in weight gain and 508 calories per day greater intake (mostly carbohydrate) than the real food diet, which resulted in weight loss. The only things that distinguished the ingestion patterns were higher carbohydrate and less fiber in the ultra-processed diet. Finally, body weight changes correlated with changes in energy intake.

Bottom line: like other studies which preceded it (eg, the DIETFITS study), this study shows that real food works, and processed food doesn’t — take it to the bank. Real food resulted in fewer calories consumed, but we can’t infer that the effect was due to increased fiber (fewer calories absorbed); decreased energy density; reductions in carbohydrate; reductions in insulin and changes in leptin signaling; feeding the microbiome; and/or increased satiety.

And what about the food industry’s real versus fake news? Can we discern if, and which, macronutrients are the bad guys? What really reduced caloric intake? Unfortunately, this study was not designed or powered to assess whether certain macronutrients (like starch, fat, fructose) altered food intake apart from its caloric equivalent. Hall is a thermodynamics guy—and a calorie is always a calorie. So, don’t expect any other seminal answers out of this one.

This abstract is available on the publisher's site.

Disclosure statements are available on the authors' profiles:

From MEDLINE®/PubMed®, a database of the U.S. National Library of Medicine.
Become a PracticeUpdate member now