We have detected that you are using an Ad Blocker.
PracticeUpdate is free to end users but we rely on advertising to fund our site. Please consider supporting PracticeUpdate by whitelisting us in your ad blocker.
We have sent a message to the email address you have provided, . If this email is not correct, please update your settings with your correct address.
The email address you provided during registration, , does not appear to be valid. Please update your settings with a valid address before to continue using PracticeUpdate.
Please provide your AHPRA Number to ensure that you are given the correct level of access to our site.
Sign in
Join now
Search PracticeUpdate
You're enjoying temporary access to this content

Oncocardiology is a relatively new and rapidly growing hybrid subspecialty of medicine. In 2019, professional organizations from cardiology and oncology joined forces to endorse the field and launch a new journal, JACC CardioOncology.1 Increasing numbers of patients surviving both cancer and heart disease are leading to the discovery of associations between cancer therapies and serious adverse cardiac events. As early as the 1950s, oncologists and cardiologists became aware of the cardiotoxic effects of anthracycline chemotherapies when heart failure was observed with daunorubicin.2 More recently, cancer drugs such as arsenic trioxide, aclarubicin, oxaliplatin, and vandetanib have been associated with QTc prolongation and torsades de pointes (TdP).3 Another 46 cancer drugs have been reported to cause QTc prolongation and their risk of causing TdP is unknown.4 Additionally, 7 protein kinase inhibitors have been associated with reports of atrial fibrillation and 2 with bradycardia.5

The challenge of managing the cardiac complications of cancer treatments has prompted many cancer centers to launch Oncocardiology programs.6 Even with specialty training and experience, oncocardiologists will need access to decision support programs and tools to manage the massive amount of information on the cardiac effects of cancer drugs and their many potential interactions with concomitant therapies for comorbid conditions such as depression or nausea.

The non-profit Arizona Center for Education and Research on Therapeutics (AZCERT) maintains the CredibleMeds.org website and curates the QTdrugs list of over 200 drugs that prolong QTc or have been associated with TdP.7 As summarized in Table 1, the QTdrugs list includes 50 cancer drugs that have been placed in one of three risk categories for QTc prolongation and TdP. These categories include the following: Known Risk of TdP, Possible Risk of TdP, and Conditional Risk of TdP. The drugs in the Known Risk of TdP category have clear and convincing evidence that they prolong QTc and they have been associated with TdP. The drugs in the Possible Risk category have been found to prolong the QT interval but there is no evidence that they are associated with TdP.  The drugs in the Conditional Risk category have been associated with TdP but ONLY in certain specific conditions such as hypokalemia, bradycardia, overdose, or drug-drug interactions. Of the 50 cancer drugs listed by AZCERT, most are in the Possible Risk category. Because most of these are relatively new to the market, it is possible that reports of TdP will appear as clinical experience grows.

The Food and Drug Administration (FDA) has devoted special attention to the cardiac risk of cancer drugs. The drug labels for 7 of these 50 cancer drugs have the highest-level warning (Black box) for QT prolongation, TdP, or sudden death. In all, 35 have a general warning for QT prolongation and possible increased risk of TdP, and 48 include recommended screening ECGs or monitoring the QTc interval during cancer treatment.

The CredibleMeds website also includes a Table (shown in Figure 1) named OncoSupport, which lists 84 drugs from the QTdrugs list that are commonly used to treat or prevent cancer, to control nausea or depression associated with cancer treatment, or for anesthesia when surgery is required. In OncoSupport, an icon is placed by each drug to depict its TdP risk category and a full definition of each risk category is included at the bottom of the webpage. Additional information about each drug is provided when a drug name is clicked. This includes each drug’s commonly used brand names, main therapeutic use, route of administration, market status, and relevant information extracted from the drug label (whether there is mention of QTc increase or TdP, recommendations for ECG monitoring, warning when given to patients with congenital long QT syndrome and any concomitant medications that are contraindicated. OncoSupport can be bookmarked or printed and posted nearby as a quick reference when prescribing drugs with a possibility of QTc prolongation.

Other related resources that are provided by AZCERT to assist therapeutic decision-making are the complete QTdrugs list of almost 300 drugs, the CredibleMeds smartphone app (free at iOS and Google and includes a search function for QTdrugs), and MedSafety Scan®, an online decision support program that calculates a QT risk score for individual patients and suggests management options.8

AZCERT is eager to receive feedback and suggestions for how OncoSupport and its other programs can better serve the needs of health care professionals and those working in Oncocardiology. 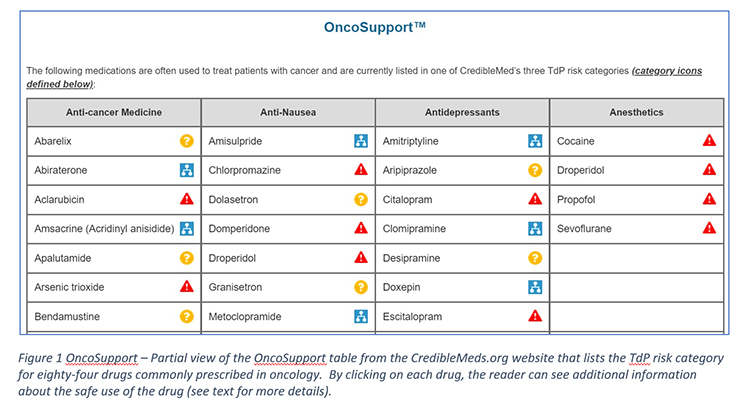