We have detected that you are using an Ad Blocker.
PracticeUpdate is free to end users but we rely on advertising to fund our site. Please consider supporting PracticeUpdate by whitelisting us in your ad blocker.
We have sent a message to the email address you have provided, . If this email is not correct, please update your settings with your correct address.
The email address you provided during registration, , does not appear to be valid. Please update your settings with a valid address before to continue using PracticeUpdate.
Please provide your AHPRA Number to ensure that you are given the correct level of access to our site.
Sign in
Join now
Search PracticeUpdate
Available until 1/1/2021

Welcome to PracticeUpdate! We hope you are enjoying access to a selection of our top-read and most recent articles. Please register today for a free account and gain full access to all of our expert-selected content.

Inflammatory Foods and the Risk of Heart Disease

The Nurse’s Health Study I and II and the Health Professionals Follow-Up Study are three of the most studied cohorts in regard to nutrition and health. These are educated, mainly white groups with financial stability. It makes one wonder if these findings would be even more robust if everyone had access to healthy food. 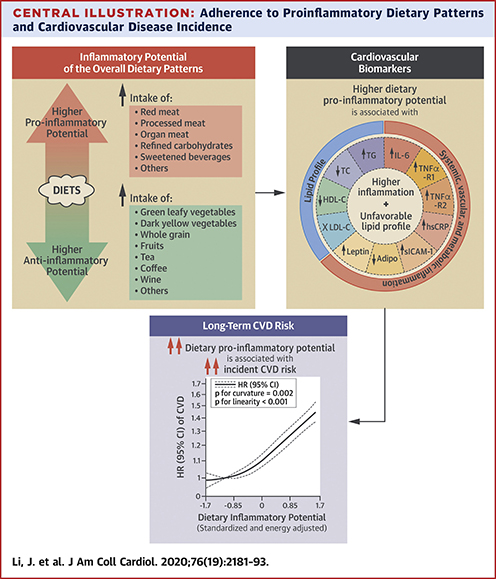 The EDIP scores were divided into five groups ranging from the least inflammatory to the most inflammatory foods consumed. When the least was compared with the highest groups, the following hazards ratios were revealed.

This is good evidence that lifestyle interventions such as the quality of nutrition is a powerful intervention. If we can see these benefits in cohorts that have more education and financial privileges, imagine the potential of getting good nutrition to those who are at higher risk?

An opportunity to improve health lies in creating financial subsidies to growers of anti-inflammatory vegetables and fruits. Making these foods groups more financially attainable can prevent the suffering and cost of heart disease.

This abstract is available on the publisher's site.

This study sought to examine whether proinflammatory diets are associated with increased CVD risk.

We prospectively followed 74,578 women from the Nurses’ Health Study (NHS) (1984–2016), 91,656 women from the NHSII (1991–2015), and 43,911 men from the Health Professionals Follow-up Study (1986–2016) who were free of CVD and cancer at baseline. Diet was assessed by food frequency questionnaires every 4 years. The inflammatory potential of diet was evaluated using a food-based empirical dietary inflammatory pattern (EDIP) score that was pre-defined based on levels of 3 systemic inflammatory biomarkers.

During 5,291,518 person-years of follow-up, we documented 15,837 incident CVD cases, including 9,794 coronary heart disease (CHD) cases and 6,174 strokes. In pooled analyses of the 3 cohorts, after adjustment for use of anti-inflammatory medications and CVD risk factors including body mass index, a higher dietary inflammatory potential, as indicated by higher EDIP scores, was associated with an increased risk of CVD (hazard ratio [HR] comparing the highest to lowest quintiles: 1.38; 95% confidence interval [CI]: 1.31 to 1.46; p for trend <0.001), CHD (HR: 1.46; 95% CI: 1.36 to 1.56; p for trend <0.001), and stroke (HR: 1.28; 95% CI: 1.17- to 1.39; p for trend <0.001). These associations were consistent across cohorts and between sexes, and they remained significant after further adjustment for other dietary quality indices. In a subset of study participants (n = 33,719), a higher EDIP was associated with a higher circulating profile of proinflammatory biomarkers, lower levels of adiponectin, and an unfavorable blood lipid profile (p < 0.001).

Disclosure statements are available on the authors' profiles:

JACC: Journal of the American College of Cardiology

Dietary Inflammatory Potential and Risk of Cardiovascular Disease Among Men and Women in the U.S